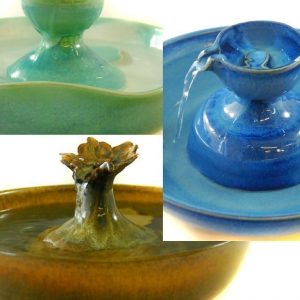 Cat fountains must absolutely have food safe glazes, but what makes a glaze food safe? It is not simply a matter of containing no lead, rather, as is explained below, there are a several factors which determine if a glaze is indeed food safe. How can you know?

What is in the Glaze?

Clearly, you have to know what is in the glaze to know if it’s safe. For centuries lead was, and in many countries still is used in glazes, not only because it contributes to brilliant colors, but especially as a flux to significantly lower the melting point temperature, thus saving considerably on fuel costs and firing time. Silica, the primary glass former in a glaze melts at above 3000 °F.  A flux brings that down closer to 2,000°. You can be fairly certain that any pottery made in America will contain no lead, due to legal regulations. How about if the cat fountain comes from China? Are they stringent about this? There is no way to know but given the savings use of lead gives, it seems not likely. Beyond that, there is a great deal more to being ‘food safe’ than containing no lead.

For example, there are a variety of colorants which are toxic – barium, lithium, cadmium which are tempting to use for the colors that can be achieved – we use none of them. But even normally safe colorants such as copper oxide or cobalt carbonate can leach out if too much is used. When you buy a ready made glaze, whether in powder form or wet, you will not get the recipe for it and it might or not say if it is food safe. Because you won’t know what is in it you won’t know if it is food safe.

Rather than buying ready made glazes for our cat fountains, as many potters do, we make our glazes from raw minerals. It takes time, but not only does this make it possible for us to continually create new colors and effects, this is the only way to know exactly how much of what minerals a glaze contains and to be able to certify that they are stable and food safe.

Based on Extensive, Scientific Testing

We base all our glaze recipes on the principles laid down by the  incredibly extensive research and experimentation of scientists/potters, Ron Roy and John Hesselberth as expressed in their book, Mastering Cone Six Glazes, which provides recipes for base glazes which can then be used to create a variety of new glazes.

By observing the authors’ recommendations for limits for which minerals and what percentage of colorants to use, we are assured of the highest quality, safest glazes while being able to continually experiment and come up with new colors.

Before you buy a cat fountain from anywhere try to verify that the potter knows exactly what is in his glazes and that they are safe. If he doesn’t make them himself, he doesn’t know and neither can you. Naturally, making our own glazes from scratch takes time. It takes a lot of time. The various minerals must be carefully weighed out, one by one, using a gram scale. There are normally from 5 to 9 components in one glaze and we usually make 10,000 grams dry weight at a time if we are sure of the glaze. (If we’re testing then we make 500 grams.) The mixture is then dry mixed, added to water and wet mixed. It is then screened through an 80 mesh sieve and mixed again before using.

Most studio potters brush or dip their ware to apply the glaze. We have found neither approach satisfactory for the creation of our cat fountains. Instead, we spray our glazes. We use a spray booth with a high powered vent fan. We wear protective gear and with this method we are able to produce beautiful finishes on our cat fountains while insuring our own well being. This is important not only for the appearance of our pieces. A very smooth surface is also easier to clean and keep clean.