Cat Won't Drink From Her Bowl?

People wonder why in the world  their cat won’t drink from her bowl. Or they say that the cat can’t drink from a bowl or they want to know how to get their cat to drink from a bowl. Barring some serious neurological condition or physical limitation any cat can drink from just about any source containing water that they can access, including the bowl you give them. If they’re thirsty and all else is well, they will drink. So the issue isn’t the cat, it’s the bowl you’re giving her, the water that’s in it, and possibly where you’re putting the bowl.

The importance of this can’t be overstated. Feline hydration is vital.

Cleanliness of the Water Bowl

The first consideration about the bowl is of course cleanliness but that doesn’t just mean clean in the sense of the cat bowl having been washed. If it was washed in some detergent and not well rinsed it will be repulsive to cats with their highly developed olfactory sense. And if bleach or any strong disinfectant was used and not completely rinsed away the cat won’t go near it. Likewise for vinegar which is a good cleaning agent. Rinse, rinse, rinse.

One of the most important considerations about why your cat won’t drink from her bowl has to do with the material it is made of. It is entirely possible that your cat won’t drink from her bowl because it is made of an offensive material. Ceramic and glass are best, stainless steel is the third choice and plastic is a non-starter. (Plastic is at first ok with cats but as bacteria penetrate and slime builds up they will reject the plastic.  Glass and ceramic are non-permeable and have no intrinsic odors or tastes.

Stainless may give off an unappealing metallic taste but none of those three materials are subject to scratching and harboring bacteria which can generate unpleasant odors and tastes and which can cause chin acne in cats. Plastic is guilty of both those sins. It has intrinsic odors, which we  may not detect but your cat can, and it does scratch and in those scratches harmful bacteria grows and this also causes biofilm (slime) buildup. 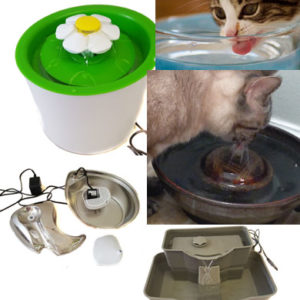 What Kind Of Water Is Best For your Cat?

Too much chlorine or other additives, natural or not, could be the cause. To test this, give your cat bottled water to see if he drinks that. If so, you know the water is the problem. If it is an issue with too much chlorine, activated charcoal, or carbon (they are the same thing) in a filter in the water can resolve this issue. Most cat fountains offer this and such filters can be purchased at pet stores. Read more about water for your cat here. 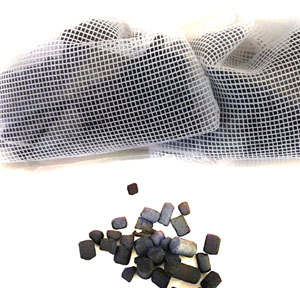 One of the commonest causes of a cat’s reluctance to drink from a bowl is that the water isn’t moving. This is finally being understood broadly and most veterinarians are now aware that cats crave moving water, and for one very simple reason. Cats are still very much wild creatures and in the wild, stagnant, sitting water is often lethal. It harbors deadly bacteria and cats know to stay away from it.

Cats are hard wired – genetically disposed – to seek moving water such as is found in streams or natural bodies of water, not standing pools, which is what water in a cat bowl looks like to them. This is why so many cats stir the water with their paws, jump onto the sink when the faucet is turned on, go into the bathtub to catch some falling drips or even drink from the toilet which often shows moving water.  This may also be why cats move their bowl. They want to see the water moving and by moving their bow, it does. They are instinctively aware that moving water is safest. So the obvious solution to this is, give your cat a cat fountain. Cats love them. They see the water moving, they can often hear it, the water is well oxygenated so stays fresher and is just all around the best thing for them. 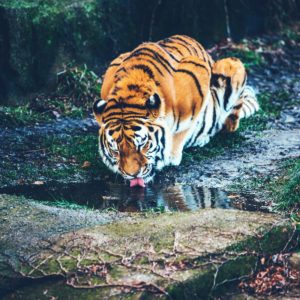 Where Should You Place Your Cats’ Water Source?

Finally comes placement. Where are you putting the cat bowl your cat won’t drink from? Some obviously wrong places that can account for why cats won’t drink from their bowl is anywhere within smelling distance of the litter box, next to loud appliances, in highly trafficked areas or within the domain of another, dominant cat. A less obvious, not good place to put your cats’ water is next to the food bowl, again for a simple reason having to do with their wildness. In the wild cats don’t find their food where they find their water. They keep them apart because if next to each other decaying food can get into the water and contaminate it. Cats don’t think this out like, “I’m not going to drink that water it may be contaminated by that food”. Rather, like their need for moving water, it is hardwired in them to prefer that they find their water not where they find their food. 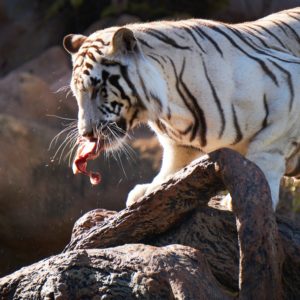 These tips should help resolve the issue of why your cat won’t drink from her bowl. If you work through them one by one you should be able to remedy the situation. And of course, we ask you to keep in mind that a handmade ceramic cat fountain, properly placed within your home is the best solution and will help you keep your cats healthy and happy. 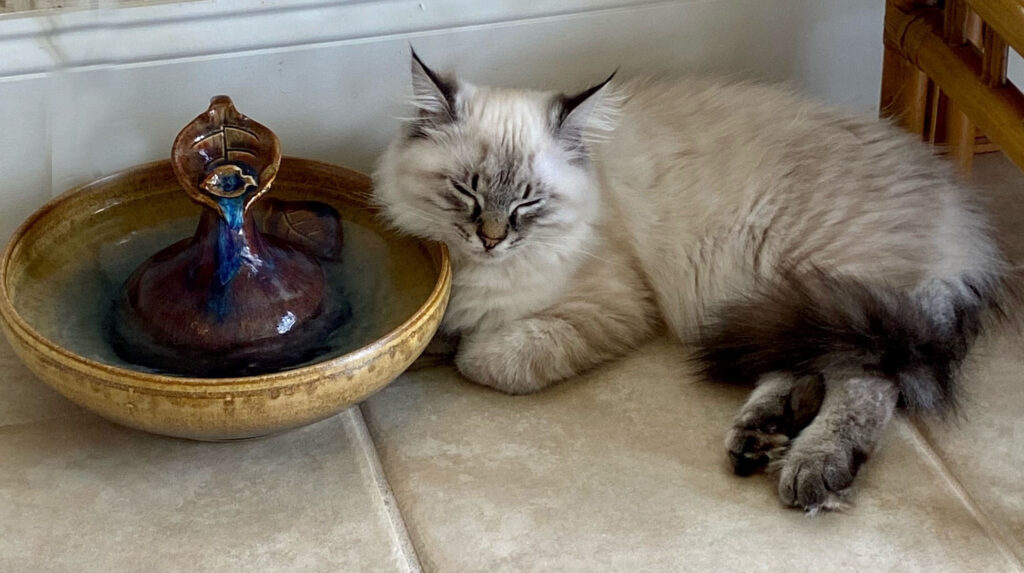