Why is a pet fountain important?

Because of a serious disease in cats and other pets called Urethral Obstruction a pet fountain is very important. Many cats are prone to a blockage in their urethra, the tube that carries urine from the bladder, which can lead to a very serious condition and can, and often does result in death. Cats, dogs and other pets are prone to this condition.

The obstruction is a pasty substance called Matrix as well as small ‘stones’ called Calculi, but how and why some cats produce it is not known. It is thought that diet is a factor, as can be stress but what is known to prevent the disease is increased water intake.

If there isn’t enough water available, or no attractive sources of water a pet may not drink enough. This leads to a very concen 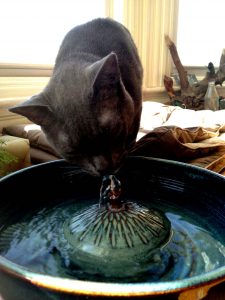 trated urine and it is in that the matrix tends to develop.

Symptoms to be aware of  with urinary blockage are:

In advanced cases when the cat has not been able to urinate for twenty four hours or more, he will be in extreme pain, clearly ill and close to death. Get him to a vet immediately.

But before that happens: