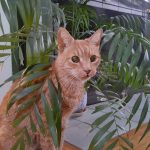 The American Shorthair, formerly known as the Domestic Shorthair

is widely believed to have come over on the Mayflower where they were employed in the service of rodent control – a job they kept while living with the colonists and for which they were very much valued. They bred and spread and during the goldrush it is said, you could buy one for $50 – a hefty sum in the middle of the 19th century.

In many respects the American Shorthair can be considered an ideal breed. They are very hardy, good tempered, playful, affectionate but not demanding – (they like to be in your lap but they’re not in your face). Though independent and not really liking the act of being picked up, once in your lap they will purr wonderfully and thoroughly enjoy the closeness and affection. When they’ve had enough, they’ll leave, without apology.

Fairly intelligent, they are easy to train and they adapt well to a variety of circumstances and even to changes within their environment. The cat below was taught in one try to leap from pillar to pillar on request and he seemed to enjoy doing it. 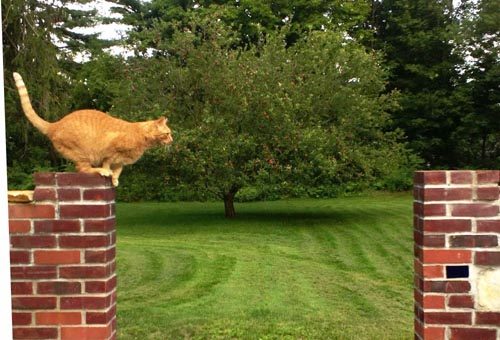 They have quiet yet expressive voices but are as apt to show you what they want with silent behavior sans commentary, and they’re good at that. Though calm and easy-going they spook readily at sudden movements near them but quickly return to a calm, unruffled state – as if nothing every happened.

The American Shorthair was valued for his hunting skills, which he has retained, though most don’t have the opportunity to develop and use them.  If you have a situation calling for a mouser, however, you’ll not go wrong with this breed. 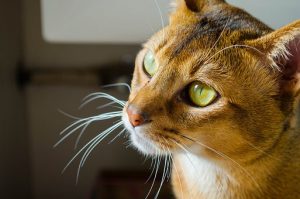 The breed is strong, muscular yet very agile. They come in a wide range of colors,  many displaying tabby markings. With proper care this cat will remain healthy and live to between 15 and 20 years old. Though at ThirstyCats we recommend adopting, we must still say, hats off to the American Shorthair, an excellent cat for just about any caring home.

Like most other breeds the America Shorthair responds very well to a cat water fountain and because of the short fur, a simple bubble-up is ideal, unless somehow your shorthair has developed a taste for the faucet (which happens).Our shorthair, Bijou has enjoyed his bubble-up cat fountain for many years.He quiety sits and drinks for several and up to five minutes slaking his thirst. 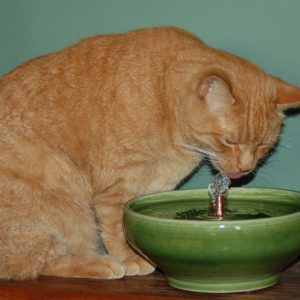 Information in this article was obtained from Natoli’s Cats of the World, Barrons Encyclopedia of Cat Breeds, Desmond Morris’s Cat World and from personal experience.

Click here to find a breeder of the American Shorthair