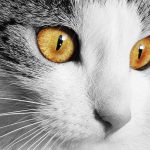 Cats see very well in low light but are as blind as we are in no light and don’t see as well as us in high light situations. Their vision is optimized for dawn and dusk but they do well on non-new moon nights. Naturally enough. They are nocturnal and in the wild do most of their hunting between dusk and dawn.

Although not good at seeing detail in daylight, at night they see far more detail than we do and their peripheral vision is greater than ours (some sources say they can see 285 degrees and we, 210, other sources say we can see 180 and cats 200). And they do see colors but it is thought not all we see and not as vividly. Their perception of motion is more important, at which they are extremely adept. 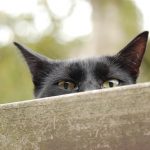 What cats lack in vision they more than make up for in hearing with an auditory range two octaves higher than we hear and a half to full octave higher than dogs. Better still, they can triangulate for the source of a sound with their ears by using each ear independently, comparing the minute differences in tone and arrival time of the sound.

A cat walking within a yard of a colony of mice active beneath a foot of snow can hear their high-pitched squeaks (which we wouldn’t even hear above the snow) with sufficient accuracy as to be able to pinpoint the source, launch himself into the air and come down through the snow in exactly the right spot and come up with a mouse in his mouth. No wonder they’ve survived so long in so many varied environments. 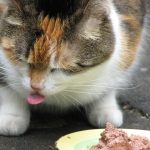 Their most deficient of senses with merely 500 taste buds (we have 9,000). Although they taste sweetness it is probably the least attractive to them, which many scientists think is why they evolved as carnivores, rejecting sugar rich vegetation so desired by other animals, though clearly there are exceptions to this. Science insists that cats don’t taste sweet but there are many of us who know our cats to eat sweet foods. Jackie, of Thirstycats, had a cat (MooMoo) ,who would tear into the grocery bag if it contained blueberries and eat his fill. Perhaps he smelled something in them he needed. Which brings us to the next sense. 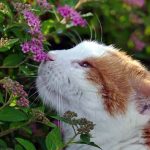 Although inferior to dogs, cats’ sense of smell is 14 times superior to humans with twice the number of scent sensors in the nose and also having a sensor in the roof of their mouth called the Vomeronasal organ
As with us, their sense of taste is inseparable from their sense of smell. Warm food is more appealing to them because it is more fragrant. Cats prefer their food to be the same temperature as their tongue, about 101 degrees F. (If you are feeding your cat wet food from the frig and he isn’t going for it, try warming it up a bit with hot water. The increase in fragrance is more apt to stimulate his hunger.)

Being carnivores, they have a high degree of sensitivity to the quality of meat as decaying meat produces nitrogen compounds to which cats are attuned. This explains why your cat would eat the wet food you offered him yesterday but turned his nose up at food from the same can today. It’s not that it’s gone bad. It is that it has gone far enough toward bad to be not to his liking. Anyway, he knows he’ll get fresh if he just walks away. We are so well trained.